When Barry and I finally arrived at Ho'okena Beach, there were no more than twelve people on the beach. The waves were calm, the view was spectacular, and dolphins were playing in the distance. 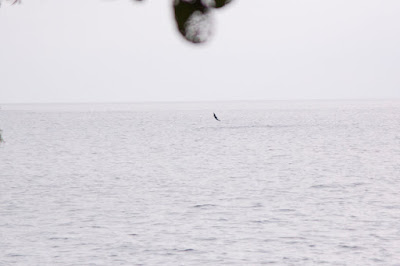 Barry and I sat in the car in the parking lot of Ho'okena for about half an hour while he told me about the events leading up to my dad's arrest in more personal detail. There was a car deal, a bail loan, and some harsh words exchanged--but, Barry was more than willing to work something out to rekindle their friendship, which I respect.

We finally went down to the black sands of the beach and found an out-of-the-way bench to sit and enjoy the shade and the serenity of the place. Barry continued with bits and pieces of the strange belief/pseudo-science that he subscribed to. I commented here and there, and quickly realized the futility in trying to bestow any actual fact. 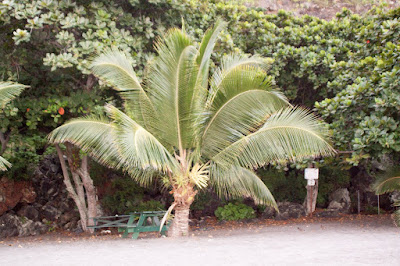 It was at this point that something struck me; I had to be up in the morning at 3 am. Barry had mentioned me sleeping on his couch, but I didn't think about how early I had to be up--and talking on a video call.

"Hey, I have to be up pretty early to join a video call for work, is that going to bother you?"

As it turns out, Barry lives in an old, dilapidated RV that has been haphazardly attached to an even older, rusty bus. There is a small section built of old palette wood that is built off of a cut-out section of the bus that has a tarp for a roof--supported by two long branches tied to the buss with baling twine. I learned this after I dropped him off, but I'm getting ahead of myself.

Another thought occurred to me; a thought that may just get me out of this arrangement. Hanging out with crazy; I can deal with that. Sleeping in an old bus in the middle of nowhere on a tropical island; I've done much worse. Both of those things combined, though...

"No. You can charge your phone in the van, though. You know, if you need to."

I explained to Barry that I had to work and that I needed my laptop to do that. Given that I had to work a full day, being without power would not be possible and I would have to take the drive back to Hilo and then back again to Kona. He seemed a little letdown but said he understood. We continued staring out at the ocean for a while, and Barry went and took a dip. I took pictures and thought for a while. 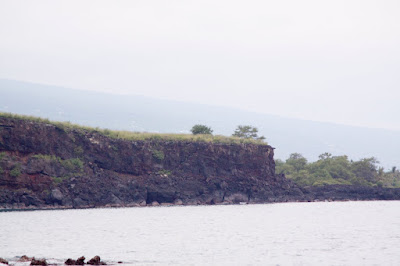 The cliffs to the southeast 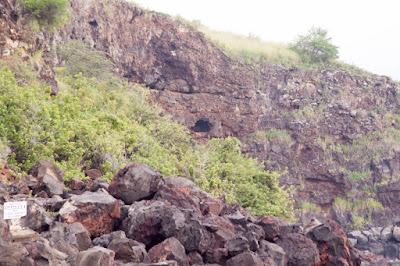 A small cave closer to us 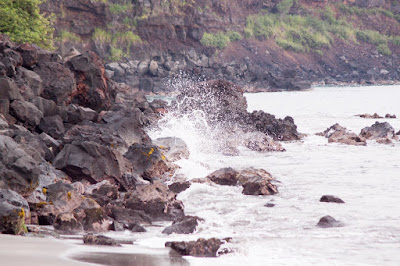 I took a ton more pictures, but due to the reason for our isolation--take that as you will--I over-exposed 90% of the pictures to the point of no recovery. There are plans in the works to go back and delve deeper into all of this, I will certainly be more mindful with my cameras.

Barry and I left Ho'okena long before sunset, so I had some time to drive before it got dark. When I dropped Barry off, I saw the property, but only from a distance. I could see part of the bus and the makeshift addition with the tarp roof. We shook hands, and I left--but not for the hotel. My destination was a bike shop in Hilo, then up to Mauna Loa.

By this time, everything I had was dead, and I couldn't waste any daylight charging any more than what I could with the $5 charger in the car. I rented a hybrid bike for $20 and played hell getting it into the Versa. I didn't have the time--nor possibly the endurance--to start from the bottom of the suggested route, so I started at about 6,400ft.

The path I took was only about 12 miles one way, but it was grueling like I'd never known. There were sections of the road I wished were simply uphill climbs, but they seemed to surge out of nowhere with no real downs to speak of. I took a couple of breaks when the path seemed to be at it's least inclined, and it ended up taking me nearly four hours--for an embarrassing 6 mph average speed.

I was glad to have the hybrid bike because I veered from the road leading to the observatory onto another path that I can only assume was a service road of some sort. I righted myself and ended up at the gate just before the observatory. I had passed some markings in the road that signified the 11,000 ft mark.

The decent was an entirely different, and somewhat frightening experience. I would get waves of pure pleasure when I could see all around me, and it seemed safer to go faster, but then I would get struck with a sudden fear, as I rounded a sharp bend or crested a small berm, that someone may come up the mountain and I wouldn't be able to stop or swerve fast enough to avoid them. This, of course, never happened. I saw absolutely no one. I didn't even see any other cyclists.

I wish I had been able to take pictures; not really on the whole route, it was unsurprisingly bleak, but there were a few opportunities for taking some pictures for memory's sake.

After returning to the car and stowing the bicycle--which seemed three times heavier now--I proceeded down the treacherous roads as the sun set. I arrived back in Hilo just in time to return the bike and head to the hotel; I was certain I wouldn't have any trouble sleeping that night--I wasn't entirely wrong.

I had eaten a Cliff bar on the way to Mauna Loa, but I was well ready for another when I got to the hotel. I smoked a cigarette and shared my experience with the roofer who seemed to have a cigarette at the same exact times each day--which was fine because I apparently did the same. I checked my emails and messages, and then I took a shower and got ready for bed. It took me an hour to fall asleep, but I did actually fall deeply asleep and awoke the next morning feeling rested for the first time on the trip.

Thursday, work would wait--I had to drive to Kailua-Kona to get my dad.
Posted by David Linke