Many of you may be wondering when I will post pictures. I will start with this post.

This was the view of Hilo Bay from the balcony of my hotel room. I did not take any pictures of the room, and I took few pictures on my various escapades. The reason for this is two-fold; when I started on this adventure, I hadn't really thought there would be much to share. Seriously, I knew I had to work most of the time, and I had little to no money to do anything, and I had one goal; free my dad.

Thankfully, my phone alarm woke me effectively--there was no clock in my room. At 3:00 am, I was up and on my way to the vending machine to try the second row of pop-tarts to see if they were any fresher. I was pleasantly surprised to find that they were a different flavor, but it didn't matter much because they were also just as old and stale. I consciously made the decision to forego future pop-tart breakfasts.

My meeting was fairly uneventful as was my work and my lunchtime Cliff bar. Before I could call Barry, one of the other guests I had been talking to on the smoking bench invited me to get some pizza. Food! Mostly. The pizza place was good, the pizza was middle-of-the-road pizza you'd expect from your local pizzeria. I ate one slice and couldn't eat any more. I was a little surprised. I had eaten a grand total of three Cliff bars and two pop-tarts--three individual tarts technically, I threw the last single pop-tart away.

On the way back to the hotel from the pizza shop, I got the phone call I'd been waiting for; my dad had been offered a deal and would go before the judge the next morning to accept the deal. He would shortly after be released. I was asked to be present in the courtroom. The session would be in the third district court in Kailua-Kona.

Having eaten and returned to the hotel, I called Barry. I told him I was headed for Ocean View and he gave me the name of a coffee shop to meet him at. I told him he didn't have to wait at the coffee shop for me, I could call him, but he insisted it was no big deal and said he'd just wait there. 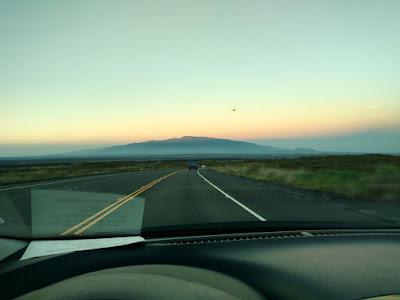 From Hilo, it is about an hour and a half or so to get to Ocean View, which is south of Kailua-Kona--the exact opposite side from Hilo. When I arrived at the coffee shop, I met Barry.